Posted on November 9, 2014 by anewlookthrougholdeyes 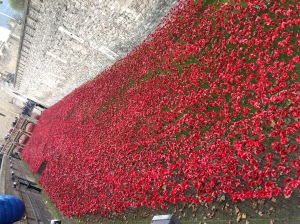 Poppies at the Tower

Transcribed below  (all spelling and punctuation is as written) is one of three mudstained letters in my possession, written on small sheets of  cheap paper in fading pencil.  Billy Brown was my grandmother Lizzie’s brother, my great uncle.  Willie, referred to in this letter is my grandfather who was in the Fleet Air arm and survived the war.  Also below is the citation from Brandhoek New Military Cemetary.

Sunday (no date on letter)

I suppose you wonder what sort of a lad I am not answering your letters or fags.  Well Lizzie you will pardon me for not answering you sooner when I tell you your fags arrived the day before we left the Billet we were in and there we was no post lifted.  We had four days march and we had no chance of writing until we arrived here 4 miles from the firing line.  We go in on Tuesday night and a hot place it is too.
We have been before I think it is all alike as there is very little doing all along the line but the weather is damp and cold and the trenchs are up to the knees.  But you just have to put up with this.  Lizzie if you could send me a good pair of socks as the ones the army give you are no [….indecipherable] good .  I have small feet remember size 6.  How is Willie getting along.  Tell him never to be caught like me or have nothing to do with the Army.   You might think I am fed up.  Well yes I am with this life but I would not like to be running about in Belfast all the same.
The whole British army is fed up with it and I am in the bunch remember the Germans are not beat yet.  The papers give you the good side of the war but they don’t’ tell you the bad points – but we will win nothings surer than that.
Well Lizzie I will close.  Remember me to all the kiddies.  Hope they are doing fine.  Also Willie.  Are [our] leave has started but god knows when I get mine.  Married men go first.  But 6 days in Belfast can be like a month to me.
Well I will close.  Hope you are keeping fit which leaves me the same.
Yr loving brother
Billy
PS Billy Calvert was killed today by a bomb his mother will be in a bad state hard lines but someone has to go down.  You know who I mean from Cliftonville.
Write soon.
xxxx

More information about the ceramic poppies at the Tower of London can be found here.

Poppies at the Tower of London: a more conventional view

Like Loading...
This entry was posted in Art, Family and tagged art, Family, war. Bookmark the permalink.