Posted on January 29, 2014 by anewlookthrougholdeyes 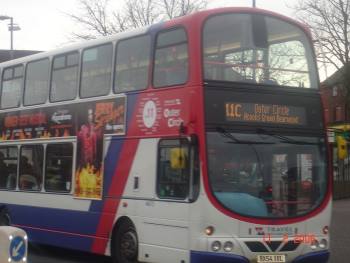 Imagine a ragged 36 mile circle encompassing the UK’s second city and you will envisage Birmingham’s Outer Circle bus route, home of the famous (infamous) No. 11 bus. This bus has been running since 1923 and takes approximately 11 hours from start to finish. It is such a legend that songs have been written about it.

Radiating inwards to the city centre is a complex spider’s web of shorter routes serviced by numerous buses with numbers that seem to defy logic but manage to cover most of the city locations. All the buses stop at varying distances and have different timetables.

The stops have signs indicating the identifying numbers of the buses which stop there and sometimes the timetables. Not only are the numbers and timetables difficult to see if you are VI, but the stops themselves can be quite obscure. Now, some have shelters and lighted signs indicating the next arrivals. But it is confusing. Even locals have difficulty on unfamiliar routes.

Once you have mastered the services complexities and confusions it is excellent and also free for pensioners. This gives valuable mobility for older people and is much appreciated. Most regular users, particularly children and young people, hop on and off with no difficulty, BUT for me it is problematic because

Large cards are available to VI passengers to hold out at bus stops to indicate to the driver which bus they want and I do have an app on my iPhone to help plan journeys. With the cards you need to know where you are going and they are heavy and with the app it is difficult to use on the move, even with voice over. In practice this usually means that, on unfamiliar routes, I am dependent on the kindness of other passengers. This seldom fails in this friendly city. There is usually someone on the bus to help but not always at the stops.

I don’t know what the answer is although I do think Birmingham City Council could improve the accessibility of the signage. There are plans for updating the service and I hope these factors relating to travellers who are Visually Impaired are taken into account.

For cross city journeys I use the local train with its clearly defined stations and voice announcements. Also an excellent service and free for pensioners within the city limits. Less flexible than the buses but easier to manage.

I suppose I was spoiled as a driver and this is a new skill to learn. I would be interested to hear how other people with VI manage.

Listened to The Woman in White by Wilkie Collins on Audible read by Ian Holm. Wonderfully exaggerated melodrama with the best villain in literature, Count Fosco.

Film, The Long Walk to Freedom, about Nelson Mandela. Powerful acting and brought back memories of the appalling atrocities such as the Sharpeville Massacre. Well worth seeing.

Celebrated a friend’s birthday at Woktastic in Birmingham. Ideal food for people with VI and plenty of it. Good company too.

Thank you to Matthew for continuing to post this for me.

This entry was posted in low vision, Transport and tagged low vision, transport. Bookmark the permalink.